The exhibition Heirloom presented Larissa Sansour’s evocative dark science fiction film In Vitro and the large-scale sculpture Monument for Lost Time. Both works were created in collaboration with the writer and artist Søren Lind and shown for the first time in the Danish pavilion at the Venice Biennale in 2019. This total installation from Venice was specially adapted to hall 3 at CC. Additionally, the work trilogy A Space Exodus (2009), Nation Estate (2012), and In the Future They Ate from the Finest Porcelain (2016) was on show and, collectively, the works portrayed a bleak future as a consequence of present-day problems.
In Vitro takes place in Bethlehem in a not-too-distant future. A major disaster has forced the city dwellers to take refuge in subterranean bunkers. Inside one of these bunkers, we meet the work’s two protagonists, the young Alia and her ageing teacher, Dunia.

Here they attempt, along with other scientists, to re-cultivate crops and plants in the hope, one day, to be able to replant fields if normal conditions were to be re-established. Where Dunia and the older generation experience life below ground as a temporary exile, life in the bunker is the only life known to Alia.
Alia was born below ground and has never seen the place she will help to rebuild in the future. Even so, she remembers detailed scenes from life before the apocalypse. Her own memories are replaced by the stories told to and implanted in her. The dialogue between the two women develops into a conversation on reminiscence, memory, and exile. Are the heritage and the memories passed on to Alia of any use, whatsoever, when the world has been destroyed and a new one must be rebuilt? Does it make sense to cling to the past, reproduce its myths and recreate its constructions?

Alia’s stock of memories appears in the film as a large black sphere. It is part of her imaginary world and represents her broken memory, the absence of her own independent memories and identity. In the exhibition, the sphere materialised as the five-metre-tall jet black, spherical sculpture Monument for Lost Time. The floor around the sculpture was covered with beautifully decorated tiles, which also appear in the film work, rekindling memories from pre-apocalyptic times. The tiles are hand-painted by a tilemaker on the West Bank where Sansour has her roots.

Heirloom painted a picture of the implications of collective memory, exile, and inherited traumas on identity. While In Vitro is based on a concrete disaster, geographically located in the heart of Bethlehem, the examination of themes such as division, exile, and identity are universal. With her poetic and sensuous images, Larissa Sansour establishes dialogue, putting a perspective on current political and universally human issues.

Larissa Sansour (b.1973) was born in East Jerusalem, but now lives in London. She was educated in Copenhagen, London, and New York. Sansour applies an interdisciplinary approach to her works comprising film, photography, installation, and sculpture, often taking their points of departure in a science fiction universe, addressing both current political and universally human issues relating to identity and belonging. Among recent solo exhibitions are Dar El-Nimr in Beirut, Bluecoat, Liverpool’s centre for the contemporary arts, Liverpool, the Chapter Arts Centre, Cardiff, New Art Exchange, Nottingham, and Nikolaj Kunsthal, Copenhagen.

The Danish Arts Foundation appointed and funded Larissa Sansour’s exhibition for the Danish Pavilion at the Venice Biennale, which was open to the public from 11 May to 24 November 2019.

Larissa Sansour & Søren Lind. Still from In Vitro (2019). Courtesy of the artist. 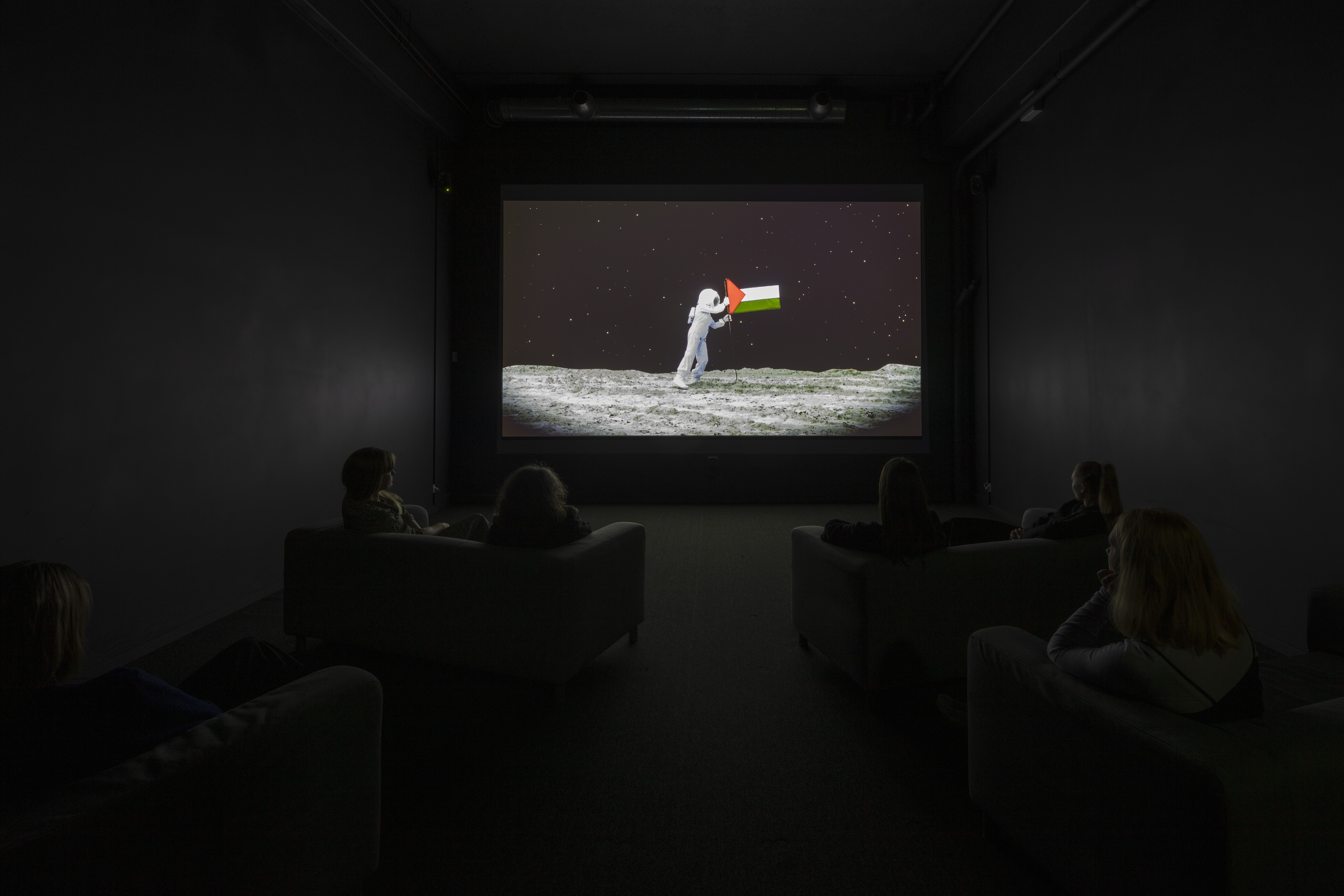